RIGHT NOW THE DEMO ONLY GOES UP TO CELADON. ANYTHING PAST ERIKA/POKEFLUTE IS LOCKED

Introduction:
This is a personal project of a Gen 1 romhack, using the dissasembly as base instead of a binary hack like it was common many years ago.
The objetive is to create a more personal interesting view of Gen 1, while maintaining the  feel of the "mess" that the original games were, but more flavorful.
Based on an original idea I had more than a decade ago, probably dating even before the gen 5 games, just that now I managed to get the willpower to do the project.

The name "Carmine Red" means basically "Red Red" and comes from the fact that Carmine dye is a natural red dye that is extracted from bugs.

Story:
In terms of story, not much has changed, after all the original games didn't had that much story to begin with. However a few key thigs have been changed around, like some areas are accessible only after different conditions, or some parts of the story can be skipped by doing specific sequence breaks.
The team rocket has a new short final arc at the end.

Features:
* Massive rework and buffs for almost all Pokémon. A lot of pokemon who had the short end of the stick have been improved. Specially bugs. Beware of the bugs.
* Extensive edit of a lot of moves. A lot of useless or duplicated moves have been repruposed into better moves. All types have now good moves.
* Several type changes. Some of them have been made to fill out barren types like ghost or dragon, or to give more flavor. Some new types makes sense, some are a bit unorthodox.
* Complete rework of the level up movesets. Pretty much all pokemon learn good moves of their respective types.
* Reworked Trainer Roosters Trainers now have slowly more and better pokemon. Gym leaders and other key trainers now have access to customized movepools! (this is done by some code borrowed from the pokemon yellow dissasembly)
* Altered level curve The level curve has been touched up a bit so it picks up a bit faster than in the vanilla game. It also aims to fix the big branching after Celadon where the game opens up and the curve stagnates
* Rework of wild encounters Wild pokemon are now much more variated than in vanilla red, pretty much all bodies of water have their own encounters ( unlike just the sea routes) and all 3 fishing rods have their own wild encounters, giving a feel similar of how they work in gen 2.
* Reworked maps and Improved Tilesets Some maps have been tweaked to make them more interesting, and a lot of tilesets have been edited to make them fit a bit more. No more potted plants that won't ever fit with any background!
* A bunch more that I'm probably forgetting or that don't fit into their own point. Like for example the casino coins have been rebalanced (because it sucks to buy them 50 by 50) or that some odd items like Ether are purchaseable.
* And of course, every single one of the 151 original pokemon is avaiable to catch without glitches! On the Demo you should be able to get around 128 if I'm not mistaken. This obiously means trade evolutions are avaiable by other means.

In terms of mechanics, this is still pretty much like the original games. The most you can expects is that some buggy features have gone now unused, but because some stuff have been repruposed. 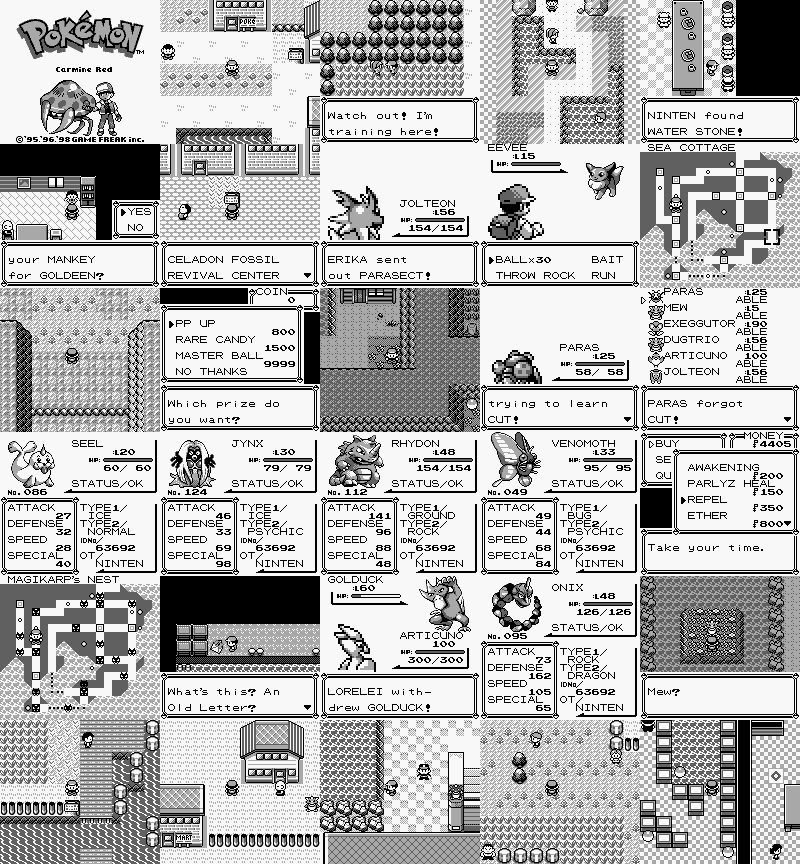 Bugs
The new item, DIRE GUARD, is a novelty item right now and might have unexpected behavior if used more than once per fight. It is supposed to create a weak substitute.
Pretty much every expected bug from Gen 1, except for the ones that are no longer accessible. (like focus energy lowering your crit rate, since now it does something else)

Credits:
* Everyone on the PRET Github for doing the dissasemblies in the first place
* Everyone on the PRET Discord server for their invaluable help with my countless questions
* Special thanks goes to Rangi42, 33Dannye, Drush, Chatot4444, FrenchOrange and more over the PRET discord
* Specially for their immeasurable patience against my stubborness of not learning for real how to program in Game boy ASM and just trial and error the changes I made over existing code

Downloads:
Current version: DEMO BETA 0.1.1 (April 23rd 2022)
You can get the Demo beta though my Github Project if you know how to build dissasembly roms.
If not, the .bps is avaiable there too and should work by patching it over a clean rom of Pokemon Red