Need help with Pokecrystal. Too much stuff to do alone.
Here's the R1 Red battle as an example: https://www.youtube.com/watch?v=SwqhBCjcHiE

Yes, this is real. This is a Pokémon Stadium 2 hack that can also work with 2 hacked Crystal versions.

And as proof, here's a Charizard. Complete with improved stats and typing. 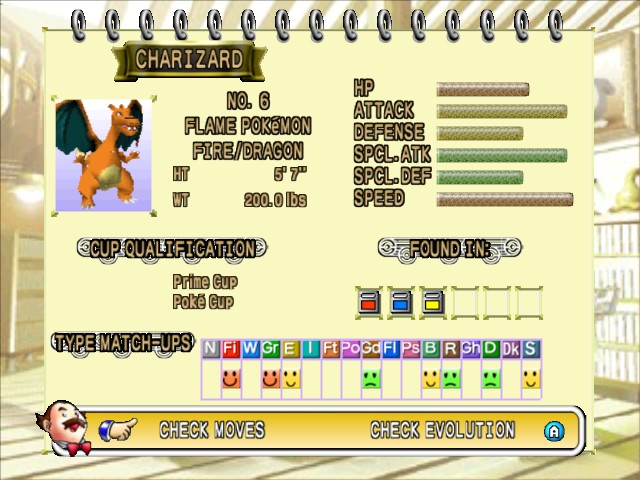 This project aims to completely rebalance Pokémon Stadium 2 and have two Crystal hacks that can be paired up with it.

As you may imagine, Stadium 2 has some strict rules that make many hacking ideas too hard or flat out impossible, like new moves or Pokémons and Fairy-typing.

However, hacking Stadium 2 has many advantages. I'll focus on two.
The most notable one is online play. There are N64 and GBC Emulators that can handle at least a bit of that. Local Multiplayer is definitely possible too, and unlike online, I tested it already.

The other is an amazing post-game adventure with multiplayer.
Hacks simply end once you complete the Story, beat the E4 and catch all legendaries.

In this project you clear at least one of the Crystal Hacks, and have everything from Stadium to do. And if that wasn't enough, Online just ensures the game only ends when there's no one else to play, and with both hacks and Stadium having insane replay value, this will keep the game going.

Now, with the project's objective explained, let's see what work we have ahead of us.

Like I said before, this project aims to rebalance Stadium 2, and develop two Crystal hacks.
Obviously, the Pokémon Stats, Items and other game mechanics that affect Stadium will have to be changed exactly like the Stadium hack.

Instead, the plan is to have an improved Trainer AI and more importantly, level caps for certain major battles like Gym Leader matches and Elite 4 Matches.
The system is based on the Stadium Cups.

Let's assume a player decided to battle Brock as his first Gym Leader.

In this example, the player would need to face Brock with 3 Pokémon in its party, with none of them being over Lv.14 and with the total party level being under 39.

Furthermore, Kanto is very flexible regarding the order its Gyms can be challenged, so this sequence-breaking will be encouraged.

Regarding the plot of the hacks, one is a remake of the Crystal storyline and the other is a remake of the Red Storyline. That way, players can pick their favorite region first, including the pokémons that usually take too long to show up in vanilla Crystal or not at all, like Snorlax, Mewtwo and the Legendary Birds. Both versions should have all 251 pokémons when combined.

Stadium is the main draw of this hack though. Impressively enough, the AI in Stadium 2 was able to adapt to the new stats and typing of all moves and Pokémons, so AI is not an issue.
However, the basic issue I have with S2 hacking is simple. The only tool available to deal with it is a Hex Editor, and I don't know how to repoint in S2. (I have no idea of the size of the banks. Yes, I'm embarrassed about that.)

With that said, ALL trainers and rental pokémons will be updated, and my current plan to rebalance S2's rental Pokémons include removing competitively unfit pokémons (No more Weedle/Caterpie/Magikarp sandbagging) and using their slots to have more movesets for other Pokémons. (For example: Having a Curselax in a slot and a Drumlax in another.)

This is a battle against Red's altered R1 team. It may or may not be changed before the release.

I did a few edits on a Crystal ROM before I found out about Pokecrystal. I don't have experience with the disassembly.

I'm willing to learn how to use it, especially the mapping, however, it would take too long for me to do all the changes by myself. There is simply no way I can do this on my own.

Therefore, anyone who already knows how to use Pokecrystal or is willing to learn and wants to contribute is welcome. Just post something here and how you can help.

Hacking Stadium 2. Could really use some help though. Join the Discord!