I'm working on more of my intro script and tightening up some of the "story" elements. Goal is this:

- On arriving in Oak's lab from a stairwell on the far right (right on warping in then), the player is called out to by a lab tech near the stairs who has turned to face him;
- The player advances one space toward the lab tech, and the characters turn to face each other
- The lab tech gives a short set of text boxes about how he hasn't seen Oak, could the player go looking for him.
- It then sets a flag which switches the dialog to a simple "Any luck?"

Here is my set of scripts:

Script 0 looks for the EVENT_SENT_TO_LOOK flag when you warp in to trigger the event. That works perfectly.
The initial text triggers perfectly, but does not appear in a text box.
The tech sprite is in the upper left hand corner of the screen (and if I am right, this is a symptom of not even being on the map yet)
The script does not advance the player sprite until after the whole "script" has executed...
The script does not even load the new text after the player exclamation, but does set the flag for the EVENT_SENT_TO_LOOK, which is at the end of that scripting segment.
The player sprite and NPC sprite DO get set properly amidst the script where they are supposed to. 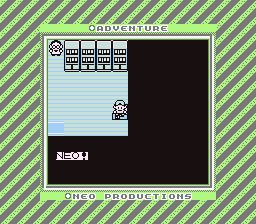 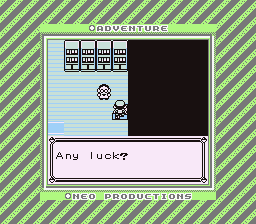 Looking for any thoughts, tips, pointers, ideas on scripting structure. I emulated the structure as best it made sense to me from other scripts, separated the movement from the text more, loops to check if the character was in movement, etc.

Sorting some of the scripting out and getting the bug fixed/elements working according to plan.
One issue bugging me now is that the Aide sprite that should appear near the steps instead still appears in the upper left hand corner and then pops into place after the first script has run. Any thoughts?

This reminds me a little of the issues that came up when I was trying to help Fotomac put some scripted Phone Calls into the game that ran as soon as you entered the map. May or may not find anything useful looking through this thread.

Afraid no, at least not at first glance; it would have helped had I not gotten my movement and text scripts working out already so thanks for the pointer :D
But yea, the only thing sucking now is that sprite. Its like the sprite isn't loaded to the map yet when the script attempts to run.

I did try something "new" on this iteration; I identified where I made a couple little mistakes in the code and corrected those and reinserted some elements I had commented out or deleted. This appears to have fixed the sprite appearance issue as well, forcing the script to do something with the sprite right away. I'm totally cool with that, as its what I wanted anyway. SO, here's the functioning set of scripts:

Well, kinda scratch that; he doesn't face to the right always :D Gotta see what's causing that; otherwise, he appears in the right spot, says the right stuff, and triggers all the right flags~ Now its just a matter of adding the next script: initiating a conversation with the Aide after the first battle & triggering the Pokeball event :D

Movement is my bane it seems...
Still can't get the facing right on a regular basis. But that script executes appropriately.
New script, copies the Give Pokeball script. It works just fine on its own; I want the Aid sprite to approach the hero though. I got THAT working on its own, but then it locks up the text when it does and won't proceed past the first set of lines...

Ah ha; it wasn't always with other movement/text scripts, it may have been in a later script in a sequence so I missed it.

Dropping this here so its useful for anyone encountering similar:

Now the relatively minor (though my experience probably more difficult) task of getting the script to behave properly on giving an item. It gives the item but does not do the whole sound effect routine, it just cruises through the "PLAYER got 5 Poke Balls!" text and into the next message...